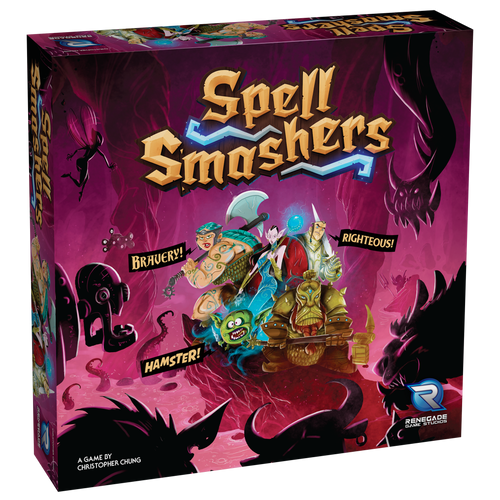 Harness the power of your vocabulary in this exciting, monster-battling, loot-collecting word game. In Spell Smashers, you combine your letter cards to spell words, smashing fearsome monsters and their even more fearsome adjectives!

When you deal damage to a monster, you gain precious coins. When you defeat a monster, you collect that monster as a trophy … and gain a new letter to use later on! But beware — as you battle these dangerous creatures, you receive wounds, which are difficult letter combinations that could ruin your day.

Between battles, visit the local town and spend your hard-earned loot to outfit yourself with powerful gear, take on new quests, buy devious potions, or grab an ale at the tavern as you boast about your battle scars. Set your sights on fame and glory as you smash monsters with your spelling skills and rid the world of evil!

Casters have long used magic to settle their disputes, often with disastrous effects.  Over the years, these duels developed into the codified contest of skill and cunning that we have today:...

You pull your wand from the folds of your cloak, and its glowing blue end illuminates the door in front of you—the entrance to the banned books section. You watch as the copper snakes twist and turn...

Survivor,” these 20 tokens are to keep track of the DEGREES OF SUCCESS and DEGREES OF FAILURE a character will use in order to tell their story of survival. Do you think you’ll be able to handle...

Step into a world of wonder and magic, sparked by the innocence of humanity’s most important heroes: the children. The Wardlings Campaign Guide brings an enchanted new campaign setting to life, where...

This is a Renegade Exclusive! “Evil spells, Santa smells, cursing coal all day. Oh what fun it is to turn kids bad on Christmas Day, hey!” —Heximas The holidays are a time of mirth and merriment —...

You have finally set out to find the truth. You’ve heard the rumors of ancient runes and the lost pages of a scattered tome that tell of ancient and evil monstrosities; calling for their return...

Lately, there have been strange goings on in the wide open spaces of the Nevada desert. A few black trucks just hurtlin’ in and out of town. About that time the rumblin’ started. But it...

In My Father's Work, 2-4 players play competing mad scientists entrusted with a page from their father's journal, along with a large estate in which to perform their devious experiments. Players earn...

Space! For millennia, humans have marveled at the cosmos. Modern astronomy gives us valuable insight about what’s happening in the universe, but there is still a sense of wonder to be had in...

Maia Strongheart stands alone against the world. A cabal of conspirators has framed her for the death of her own mother, the Sun Queen, and these traitors intend to usurp the throne from her family...