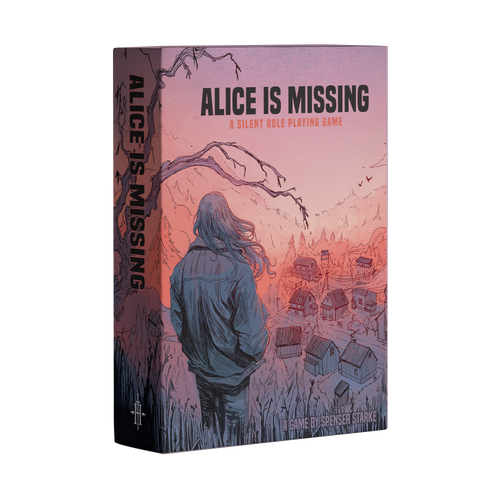 Alice is Missing is a silent role playing game about the disappearance of Alice Briarwood, a high school junior in the sleepy Northern California town of Silent Falls. During the game, players use their phones to send text messages to each other as they unearth clues about what happened to Alice.

The game runs over a single session of two or three hours. There is no formal game master, but one player will need to explain and facilitate the rules. In the first 45 minutes, players create their characters, their relationships to Alice, and their ties with each other. The next 90 minutes follow the characters’ text message conversations as they uncover Alice’s fate.

After a week-long outdoor adventure, you and your fellow Junior Braves return home to find that the world is no longer the same. Your families are missing, there are terrible things roaming...

A legacy stolen. A bond betrayed. Cut loose by their families and their homeland, two individuals are cast adrift, with no light to guide them. When the Skyborn are asked to tracking down a missing...

You know it, but nobody believes you! Especially not the “adults” who dismiss you for being a kid. You’ve started to notice strange sounds at night and now that new kid at school has vanished. You’re...

Go Go Power Rangers! Rita Repulsa’s forces are attacking Angel Grove, as always, but this time something’s REALLY gone haywire! People are missing from all over the city, Zords are on the fritz, and...

The PDF will be automatically added to your account upon purchase. Go Go Power Rangers! Rita Repulsa’s forces are attacking Angel Grove, as always, but this time something’s REALLY gone haywire!...

Icarus: A Storytelling Game About How Great Civilizations Fall

Icarus is a collaborative storytelling game about the collapse of a great civilization. Every game begins in a city-nation known as Icarus at the height of its power where, in celebration, the city...

In this transhumanist neo-noir vision of the future, the human mind is nothing more than digital codeDigital Human Freight saved and stored in a Cortical Stack, advanced technology that allows you to...

You pull your wand from the folds of your cloak, and its glowing blue end illuminates the door in front of you—the entrance to the banned books section. You watch as the copper snakes twist and...

Kids on Bikes is a Collaborative Storytelling RPG set in small towns with big adventure! In Kids on Bikes, you take on the roles of everyday people grappling with strange, terrifying, and very, very...

After a week-long outdoor adventure, you and your fellow Junior Braves return home to find that the world is no longer the same. Your families are missing, there are terrible things roaming...

The sound of the photon-powered battering ram echoes in your ship. Your Sollemnean pilot informs you that the doors have an 83.4% chance of breaking with the next hit. The cyborg dog to your right is...

Welcome to Overlight, a roleplaying game of kaleidoscopic fantasy among the shards of a broken world. It’s a world in which seven great continents hang in the sky, stacked almost vertically far...

A Storytelling Game of Desperate Measures You saw what you shouldn’t have, the veil pulled back from the secret world and the monsters who prowl it. You chronicled the tragedies they wrought,...

Become a Power Ranger and protect Angel Grove and the Earth against the evil forces of Rita Repulsa, Lord Zedd, Master Vile, and more in the epic world of Power Rangers! Whether you interrupt...