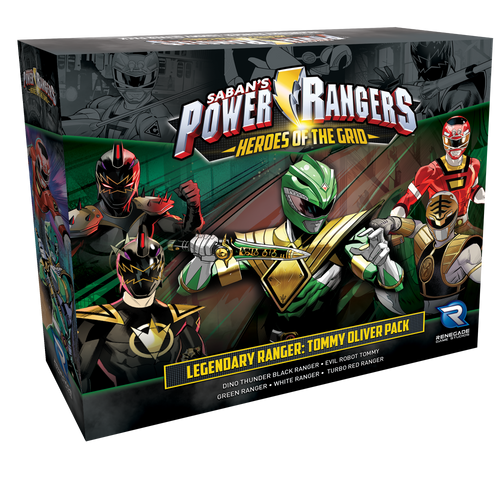 Pre-Order for the June release!

I'm a Power Ranger 'til the end!

Though Tommy Oliver started out as an enemy of the Power Rangers, he became a legendary hero and one of the greatest Rangers of all time.

This expansion also introduces Legendary Ranger Mode, which allows you to construct your own custom Ranger combat decks.

Requires Power Rangers: Heroes of the Grid to play.

Reprint arriving July 2021! Pre-order now! Power Rangers: Heroes of the Grid is a co-operative board game for 2-5 players that challenges your team to save Angel Grove from Rita Repulsa’s...

Pre-Order now for the reprinting arriving in July! A new challenge! The Power Rangers will need to intensify their attacks to vanquish these evil villains! This lineup of fan-favorite monsters and...

Lord Drakkon, an evil warlord from an alternate reality, is threatening Power Rangers across time and space! The Rangers must team up to fight and protect our world from his tyranny. Only by working...

The Psycho Rangers have risen! This team of evil was created from the power of Dark Specter. In one-on-one combat, the Psycho Rangers are almost unbeatable by their Space Ranger counterparts, thanks...

“I’m glad he’s on our side!” —Elizabeth Delgado S.P.D. Yellow Ranger   In the quest to defeat the evil that threatens our world, sometimes the Power Rangers need a...

Reprint arriving July 2021! Pre-order now! Power Rangers: Heroes of the Grid is a co-operative board game for 2-5 players that challenges your team to save Angel Grove from Rita Repulsa’s...

Pre-Order now for the June release! “Evil such as mine cannot be contained forever.” —Thrax Want some new bosses? Thrax brings a terrifying strength and sorcery to the battle, while...

The Royal House of Gadgetry has arrived to conquer Earth! The Power Rangers will test their mettle against King Mondo, Louie Kaboom, General Venjix, Prince Gasket, and Princess Archerina. With new...