In The Search for Lost Species, coming to Kickstarter January 31st from Renegade Game Studios, players take on the role of researchers combing the wilderness to find species that were previously thought extinct. Organizations like Re:wild, who we partnered with when creating this game, work with local and indigenous people, as well as scientific expeditions to gather information and sometimes find these previously thought extinct species. Given the role the natural world plays in the theming of the game, we wanted to make sure that we produced it in a way that minimized the environmental impact that creating a new board game can have.

From the start we knew that we wanted to avoid plastic whenever possible in the game’s production. This meant no plastic miniatures or tokens, but also things like no shrink-wrap on card decks, plastic bags for other components, and even avoiding shrink-wrap on the outside of the game box. We also wanted to work with a factory that followed sustainable practices, and we were fortunate to find one that utilized solar power as well as recycling their grey water, which is water used in the manufacturing process. This factory was also able to print our paper and cardboard components using paper derived from sugarcane rather than timber. Sugarcane is a very fast-growing plant, which means the resources used to create The Search for Lost Species can be renewed much faster!

To avoid plastic bags for components, we switched to paper envelopes. The box is sealed with small adhesive tabs, and of course all player components are either cardboard tokens or wooden meeples! While it’s impossible to create a game with zero waste, we feel that with the creation of this game we’ve struck a strong balance between making a great game that people all over the world can enjoy, and minimizing the footprint that it has on the environment. 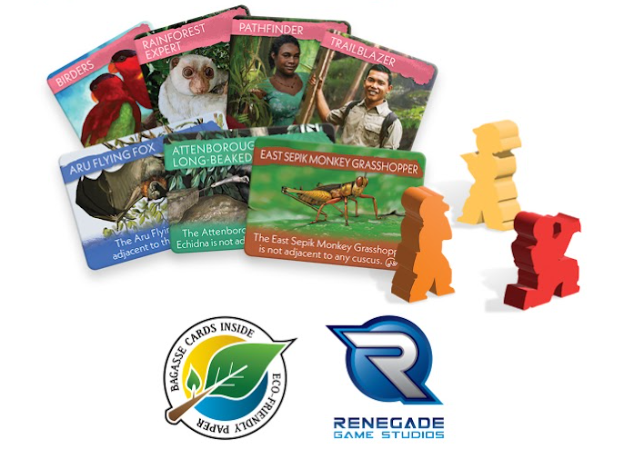 The Search for Lost Species is launching on Kickstarter January 31st!

Sign up to be notified when the project is live!

Want to see more of The Search for Lost Species? Check out the video overviews below!