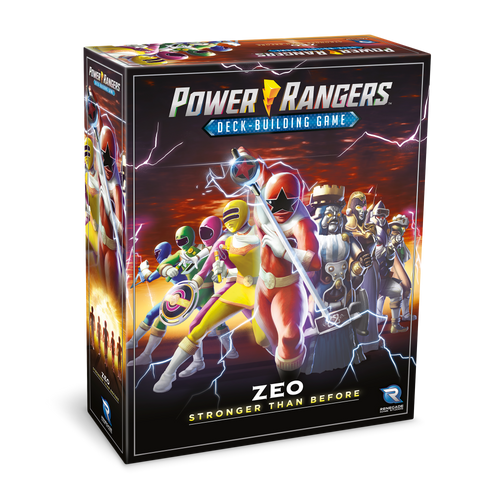 Fueled by the power of the Zeo crystal, the Zeo Rangers are the strongest fighting force ever assembled.  The Machine Empire, led by King Mondo, is determined to destroy the Earth.  Can the Rangers defeat this powerful enemy, or will the Earth fall to this unstoppable foe?

In this standalone but fully compatible Deck-Building Game expansion, some players will be Heroes and some will be Villains.  You’ll start with a meager deck that will become increasingly powerful as the game progresses, until you can unleash a powerful Megazord or Master attack.  Play against one opponent or team up with a friend to take down the opposition.  Contains everything needed to play, or combine with the Core Set for even more possibilities!

The Power Is On! Unite as the Power Rangers to assemble the Megazord and defend Angel Grove!  Or… Conspire as the Villains to dominate the city with your powerful minions!

The Power Is On! Unite as the Power Rangers to assemble the Megazord and defend Angel Grove!  Or… Conspire as the Villains to dominate the city with your powerful minions!   In this...

Download the revised rulebook here. The Autobots are brave robot warriors hailing from the planet Cybertron. Their mission? To stop the Decepticons from enacting their evil schemes on Earth. In this...

The evil organization Cobra threatens the world with their schemes and it’s up to you to stop them! In this Deck-Building game, you and your fellow players will lead teams of G.I. Joe soldiers...

Become a Power Ranger and protect Angel Grove and the Earth against the evil forces of Rita Repulsa, Lord Zedd, Master Vile, and more in the epic world of Power Rangers! Whether you interrupt...

This is a Renegade Exclusive! “Evil spells, Santa smells, cursing coal all day. Oh what fun it is to turn kids bad on Christmas Day, hey!” —Heximas The holidays are a time of mirth...

Download the rulebook here!Omega Now, Omega Forever! When the Morphin Grid was shattered, its energy empowered individuals across the galaxy. In this expansion to the Power Rangers Deck-Building...

In this limited six player set of core rulebooks for the Power Rangers Roleplaying Game, each player can use their own color book to keep on top of all of the character creation and game rules in...

Power Rangers: Heroes of the Grid

Power Rangers: Heroes of the Grid is a co-operative board game for 2-5 players that challenges your team to save Angel Grove from Rita Repulsa’s evil army of monsters. Work together to fight...