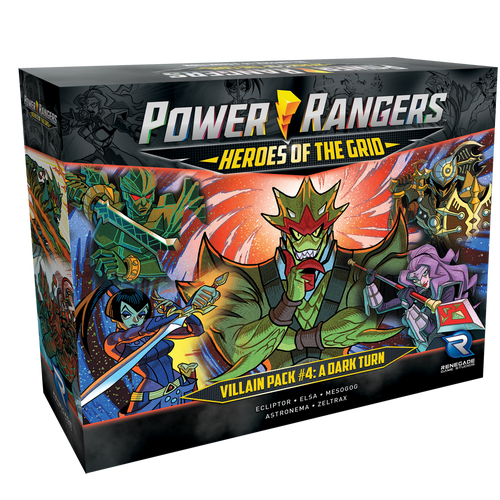 “When we’re finished, there will be no good left in the universe!” — Astronema

More devious and powerful enemies of the Power Rangers have arrived with destruction in their wake! Astronema leads a vicious assault on Earth, accompanied by her merciless lieutenant Ecliptor, while Mesogog the dinosaur-human hybrid commands his own deadly majordomo Elsa, as well as Tommy Oliver’s cyborg nemesis Zeltrax.

This is an expansion. Power Rangers Heroes of the Grid is required to play. 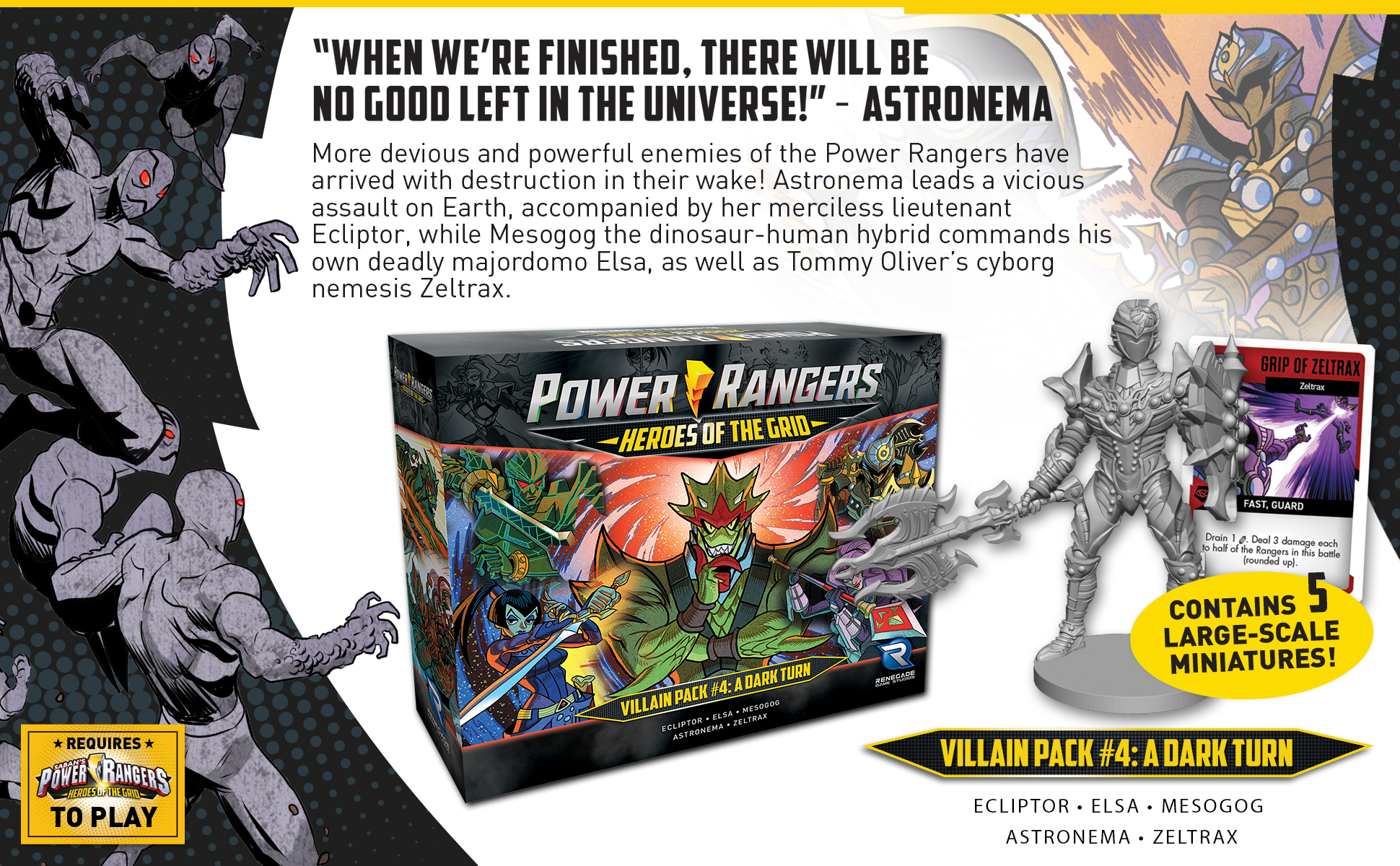 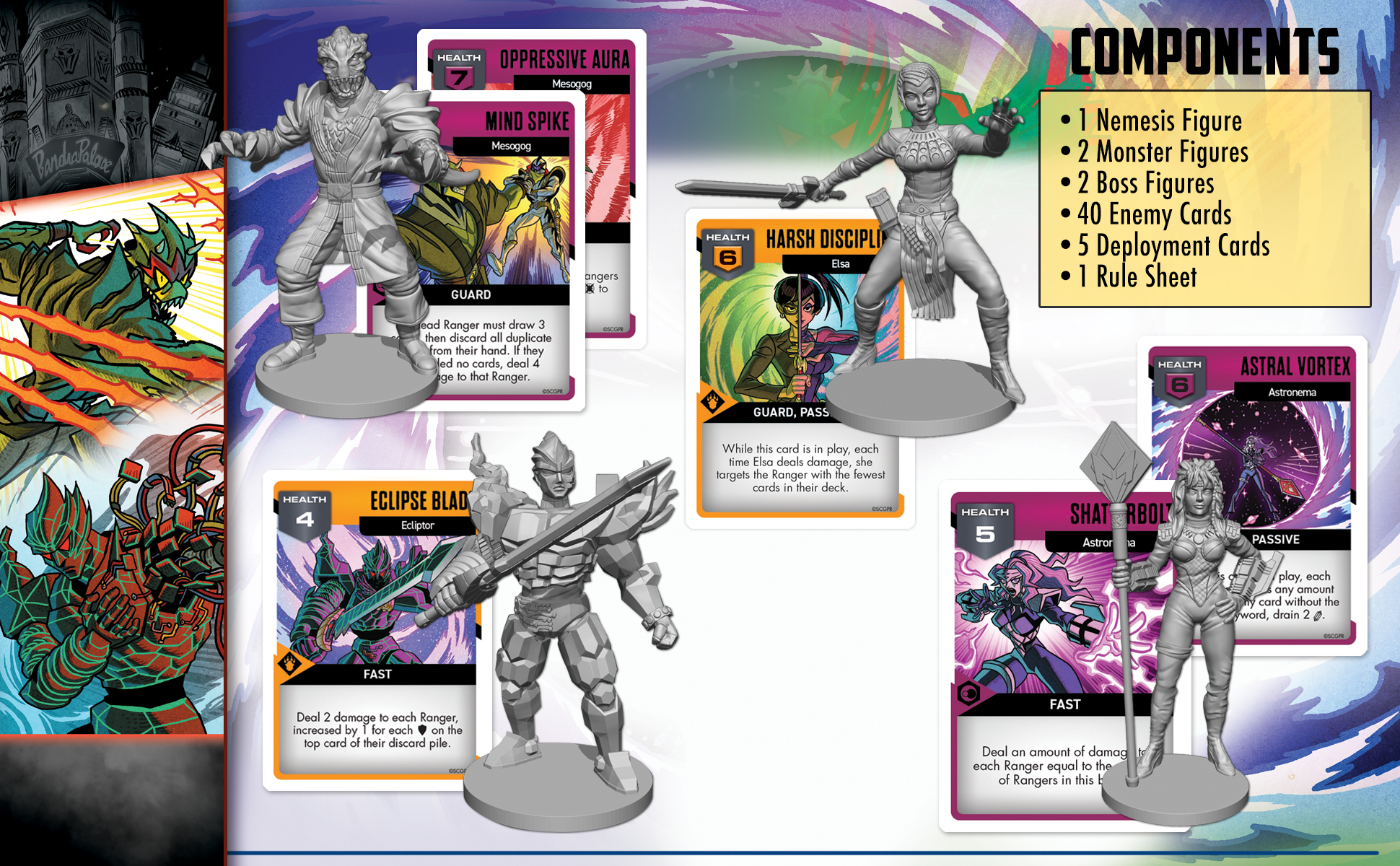 “Evil such as mine cannot be contained forever.” —Thrax Want some new bosses? Thrax brings a terrifying strength and sorcery to the battle, while Divatox has her own ambitions to conquer Earth. How...

A new challenge! The Power Rangers will need to intensify their attacks to vanquish these evil villains! This lineup of fan-favorite monsters and bosses includes Commander Crayfish, Polluticorn, Rito...

The Royal House of Gadgetry has arrived to conquer Earth! The Power Rangers will test their mettle against King Mondo, Louie Kaboom, General Venjix, Prince Gasket, and Princess Archerina. With new...

“If I can’t rule the present, then I’ll just rule the past!” - Ransik The time-traveling villain Ransik has returned!  Alongside his conniving rival and ally Frax, Ransik has brought together a...

The Power of Teamwork! When the Power Rangers work together, there’s no opponent they cannot overcome! But what happens when the villains combine their powers, too? The delusional Omega Blue...

“Looks like you could use a little help.” — Cam Watanabe New heroes join the Power Rangers in the fight against evil just when they are needed most! This expansion introduces a...

Dino Thunder!  Power Up! When evil threatens the city of Reefside, a new team of teenagers with attitude must rise to the occasion! Conner McKnight, Ethan James, Kira Ford, and Trent Mercer...

“Evil such as mine cannot be contained forever.” —Thrax Want some new bosses? Thrax brings a terrifying strength and sorcery to the battle, while Divatox has her own ambitions to...

This is a Renegade Exclusive! Includes all the Kickstarter exclusives and stretch goals from the Phase 1 Power Rangers Kickstarter! Green with Evil Expansion Scorpina Figure 8 Scorpina Master...

This is a Renegade Exclusive! “Evil spells, Santa smells, cursing coal all day. Oh what fun it is to turn kids bad on Christmas Day, hey!” —Heximas The holidays are a time of mirth...

The Psycho Rangers have risen! This team of evil was created from the power of Dark Specter. In one-on-one combat, the Psycho Rangers are almost unbeatable by their Space Ranger counterparts, thanks...

Lord Drakkon, an evil warlord from an alternate reality, is threatening Power Rangers across time and space! The Rangers must team up to fight and protect our world from his tyranny. Only by working...

Power Rangers: Heroes of the Grid

Power Rangers: Heroes of the Grid is a co-operative board game for 2-5 players that challenges your team to save Angel Grove from Rita Repulsa’s evil army of monsters. Work together to fight...