Fortunately in the Transformers Deck-Building Game, you don’t have to pick just one! The game supports both styles of play (plus solo!), right out of the box. Today we’ll take a look at the differences between the two modes of play. The game always ends when all 3 Decepticon bosses have been defeated, or when a card is needed to refill the Matrix (or one needs to be destroyed) and none are available in the main deck. In the cooperative mode, running out of cards before the bosses are defeated is a game loss for all players, but in competitive mode, that simply signals the end of your friendly competition, and you return to HQ to total up your victory points!

In the cooperative (and solo) play mode, you play Autobots working together to defeat the Decepticon adversaries while avoiding taking too much damage or running out of time. If any Autobot suffers a fifth damage, the game is lost for all. In this mode you won’t have any need for victory points, since your only concern as a group is defeating the Decepticons before time runs out or you take too much damage. Accordingly, any victory points that would be gained through card effects become Energon cubes to fuel your abilities! Relics also won’t be available in a cooperative game. They are a valuable source of victory points in competitive but their powerful effects are not used when working together. However, there's more to cooperative play than just removing cards and modifying mechanics! Several Cooperative Schemes are added to the deck, each presenting a challenge that players will need to overcome as a team. Some cooperative schemes can be thwarted by players contributing cards or Energon, while others have to be dealt with in other ways... 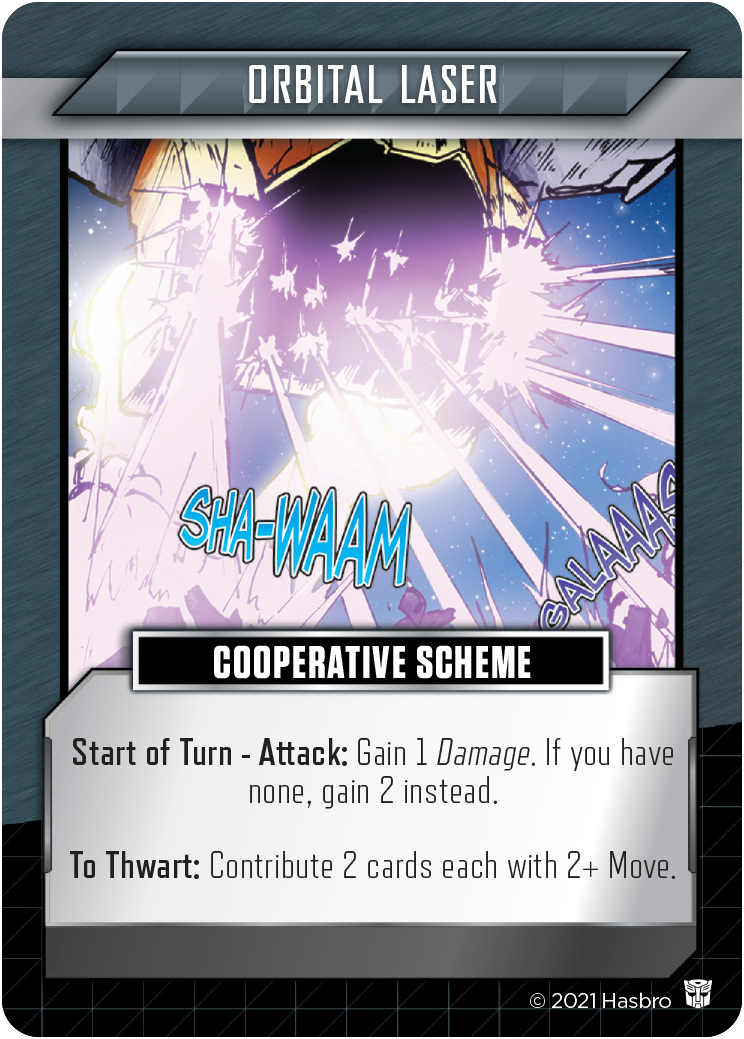 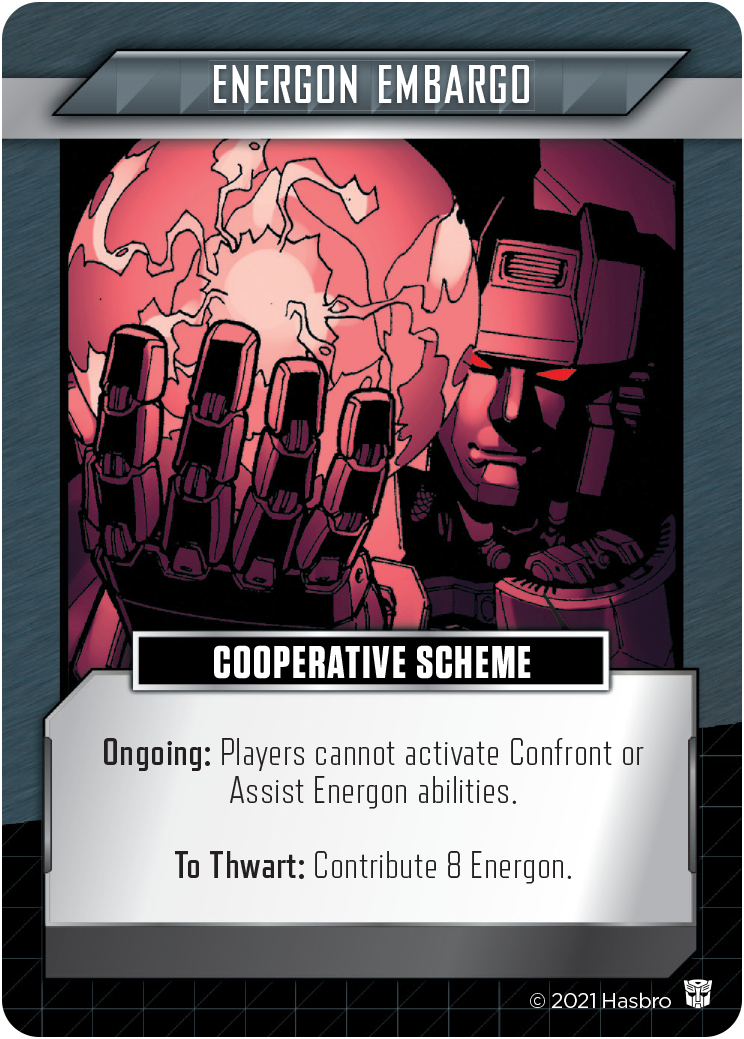 In competitive play, the Autobots are having a friendly competition to see who’s the best, and you’ll want to earn as many victory points as possible before the game ends! It is not possible to lose the game as a group in this mode. Rather, damage you take will force you to accept the assistance of other players in battle, enabling them to share in the rewards for defeating adversaries. Every 2 damage at the end of the game also costs you a victory point. Not the ideal situation when you’re battling for first place! Victory points are typically gained for defeating adversaries, placing rare and powerful relics into your vault, and thwarting Decepticon schemes. Unlike the cooperative schemes you’ll encounter in the other mode, these schemes, while affecting all players, will be thwarted by just one. 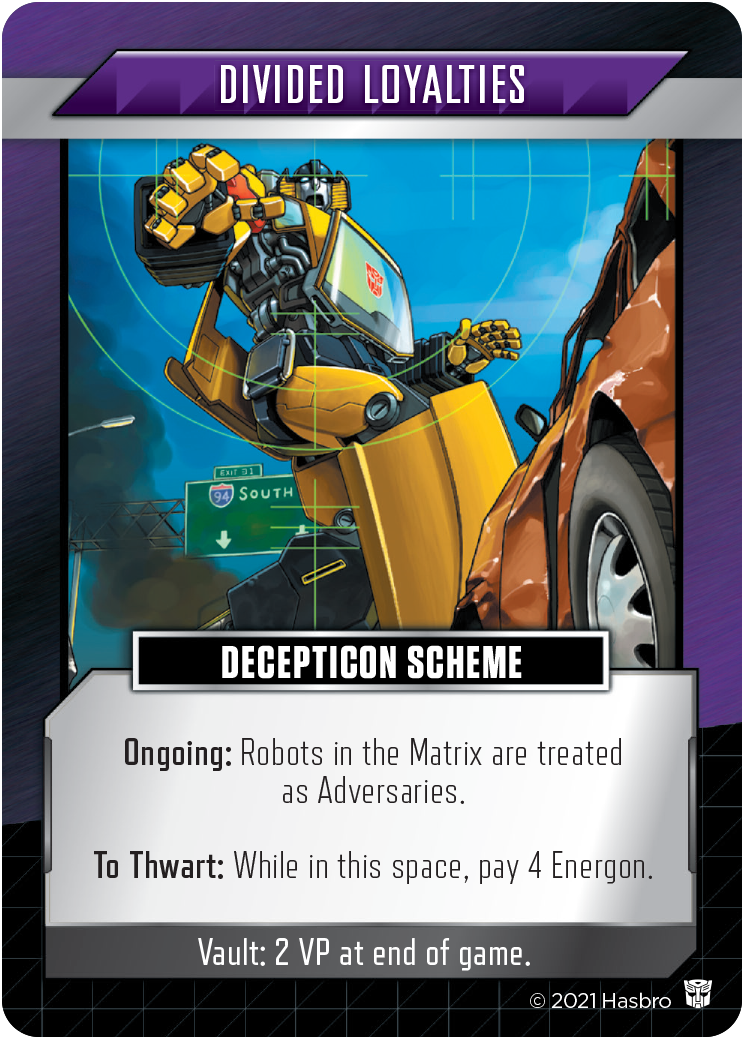 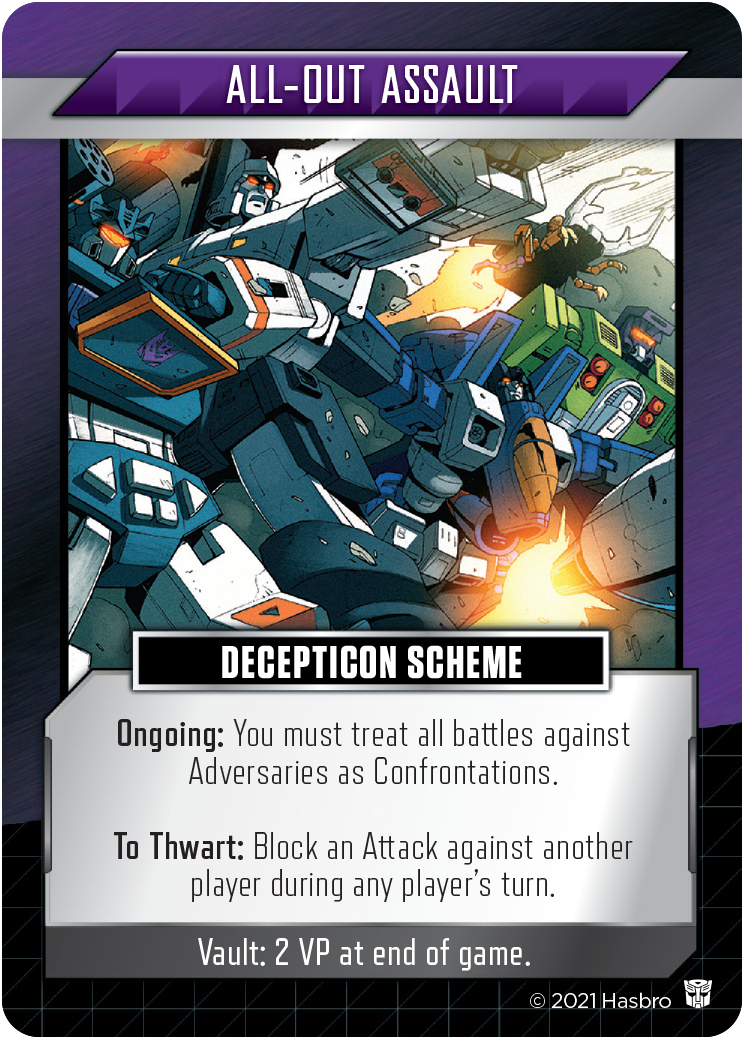 Regardless of which mode you are playing, assisting will be an important part of the game! In cooperative mode, any players with a valid card (having both the necessary range and some power) can play that card face-up when someone initiates a battle with an adversary. Since players will each get the rewards (usually victory points converting to Energon), assisting teammates will not only help defeat the tougher adversaries, but will also strengthen your Energon supplies!

In competitive mode, players aren’t able to offer assists by default, and any assists are offered face-down. If the battling player has damage, they’ll be required to accept assists equal to the number of damage cards they have, and if the battle is successful, those assisting players will earn the boons of victory alongside the active player. In addition, when someone is about to battle a Decepticon boss, each player with a valid card may attempt to assist, even if the active player has no damage. This is because one will often need power in excess of the boss’ printed cost to defeat it! The active player will then choose which assists to accept and resolve. They MUST accept assists equal to their damage, and can accept additional assists if needed in order to get the power necessary to defeat the adversary. Any cards played for an assist are discarded at the end of the battle, whether resolved or not. This does mean assisting players will be down a card on their upcoming turn! The active player will get to place the defeated adversary in their vault, scoring it again at the end of the game. 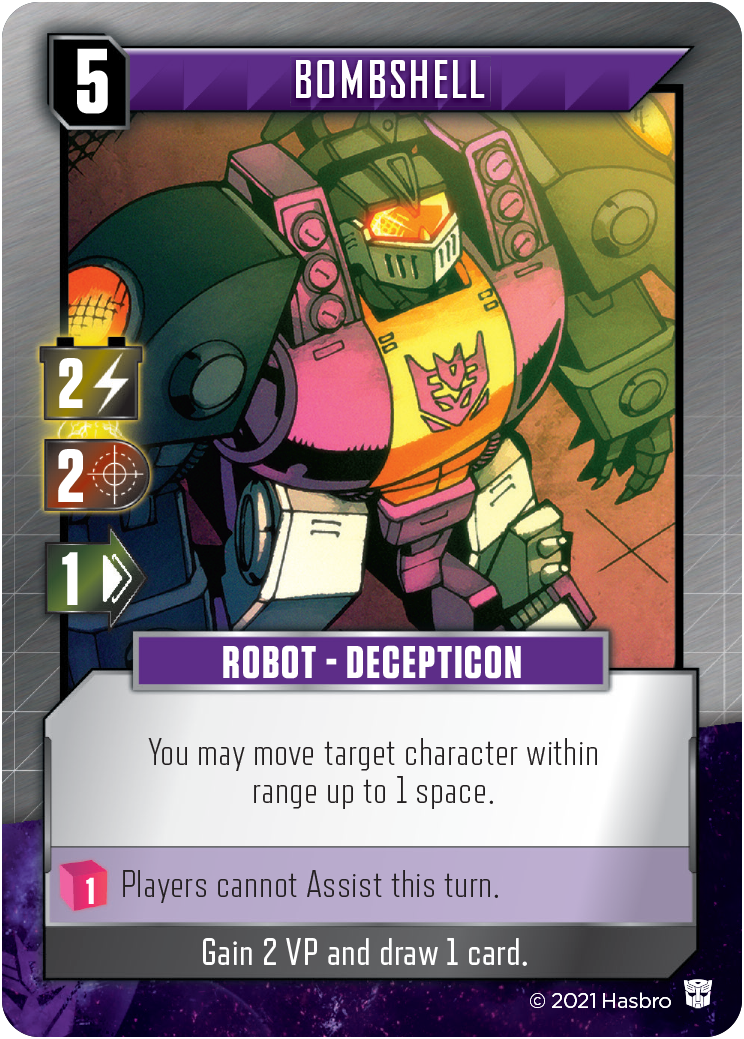 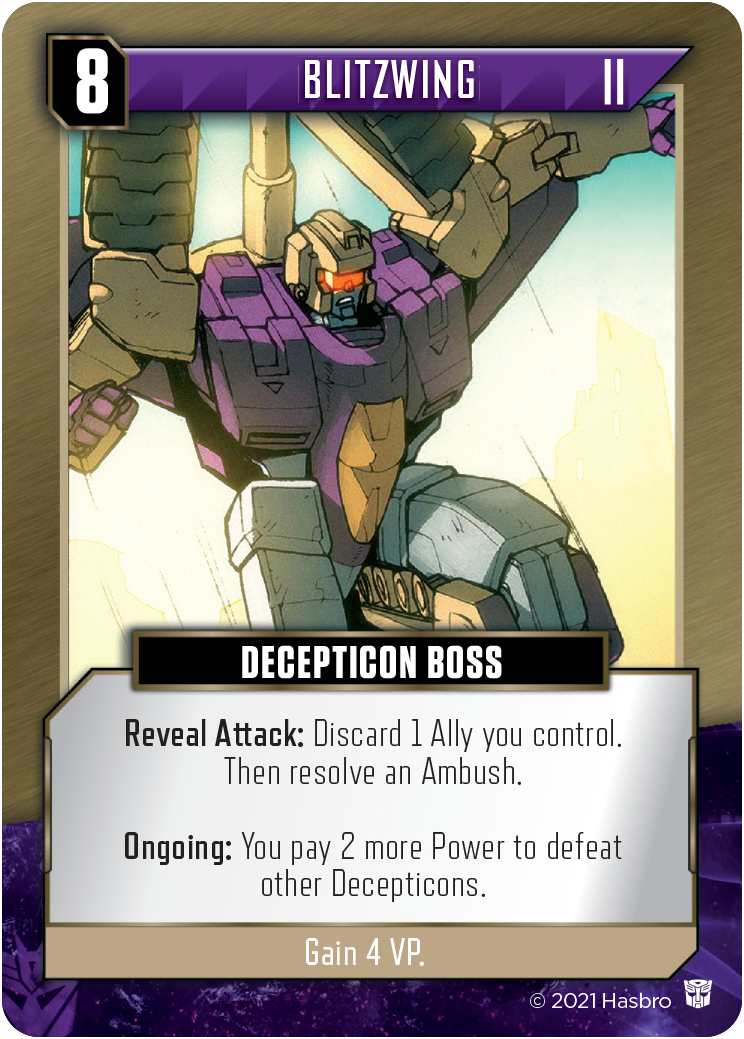 A few other fun nuances exist in the different modes. In competitive, it can be a nasty trick to search (flip face up) the card an opponent is standing on during your turn. If it happens to be a Decepticon, the other player will suffer the ambush effects, and whether it is or not, you can just move over and buy or battle the newly revealed card if you desire. It will also sometimes be to your advantage to not offer an assist when you have the opportunity, especially when the active player is unlikely to defeat the adversary without help. Saving the card to use on your turn may net greater rewards and not help your opponents! On the other hand, when playing cooperatively it will often help the team to block attacks for other players, sometimes even triggering your own Autobot’s abilities in doing so. You’ll also need to use cards to heal other players in order to prevent damage from piling up and costing you the game. 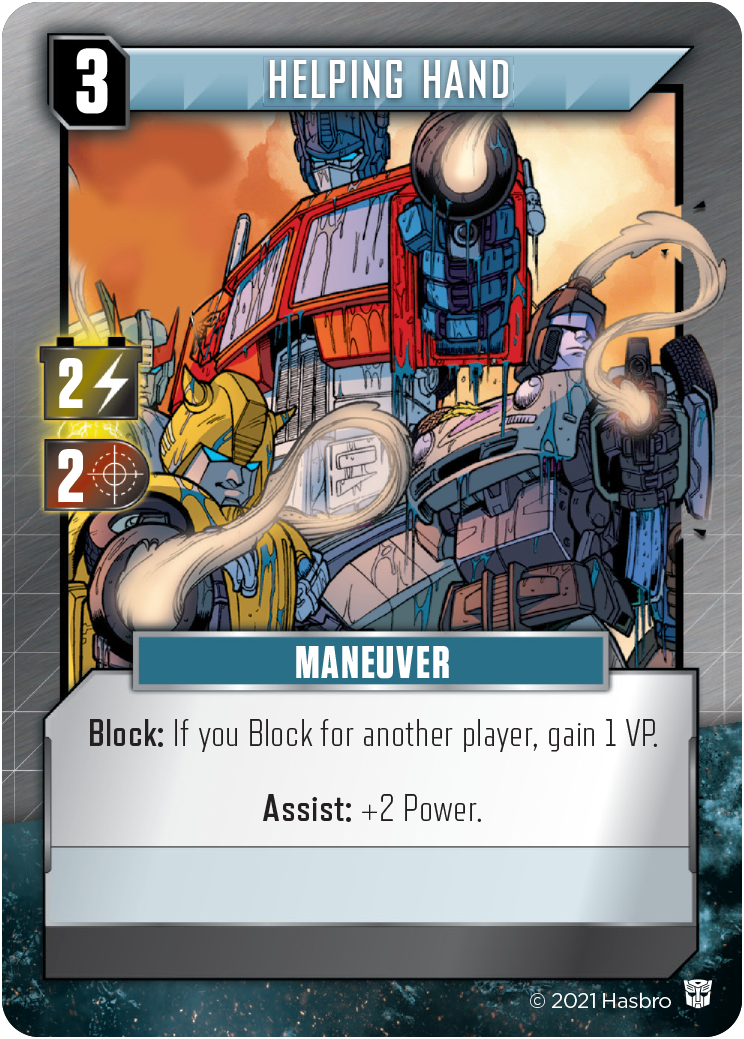