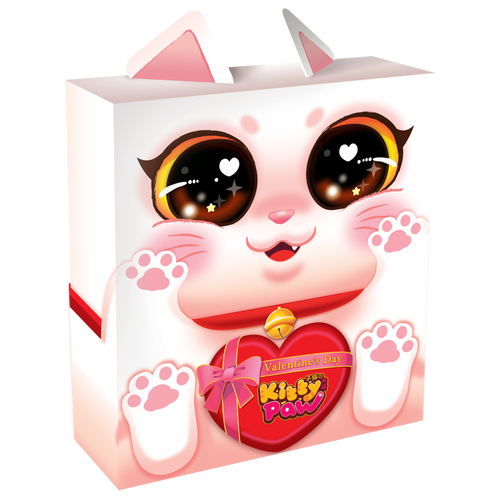 Get ready to purr for the Valentine’s Day edition of the cute classic, Kitty Paw! This adorable recognize-and-react game is perfect for the romantic gamer looking to surprise their partner this February. The box includes a space to write your own Valentine message!

What happens when seven cats run into cardboard boxes? Well, a crazy game of kitty hide-and-seek!

Kitty Paw is a dexterity and reaction game. Players try to be the first to complete the kitty combinations shown on the Kitty cards to score victory points (VP). The player with the most VP in the end wins.

Each player gets one Kitty card in each round and tries to be the first to create the patterns shown on the cards. Since this is a recognize-and-react game, all players act simultaneously.

1. All players put one hand in the center of the table and shout out "Kitty Paw!" to start the game.

2. Each player grabs one Kitty card from the row and places it in front of them. Then players grab Kitty tiles from the center of the table and arrange them to match the patterns shown on their own Kitty card.

3. Using only one hand, the "Kitty Paw" they placed in the center of the table at the start of the game, players grab only one Kitty tile at a time instead of grabbing a bunch of tiles.

4. If any player thinks that she has completed the pattern on her Kitty card, she shouts out "Meow!" and performs the "Lucky Cat" gesture.

You’re among a flotilla of ships that survived passing through a black hole. The fabric of space and the general physics you’ve known have changed. You quickly discover that your engines are offline,...

What happens when seven cats run into cardboard boxes? Well, a crazy game of kitty hide-and-seek! Kitty Paw is a dexterity and reaction game. Players try to be the first to complete the kitty...

Channel your inner lazy egg in this holiday edition of the hit card game! Take as many cards as you want, but don’t get scrambled on the last card! The Gudetama card game is a trick-taking game for...

This is the original Modiphius edition and not the newer Renegade edition. Mature Content Warning: Contains graphic and written content of a mature nature, including violence, sexual themes, and...

The Renegade webstore offers worldwide purchases of digital items. If a cart contains only digital items checkout will not require a shipping address. Read our FAQ entry about PDFs and digital items...

What happens when seven cats run into cardboard boxes? Well, a crazy game of kitty hide-and-seek! Kitty Paw is a dexterity and reaction game. Players try to be the first to complete the kitty...

“Meow! It looks so delicious!” Fatty Catty stares, drooling at the dried fish hung high on the shelf. It’s not just Fatty Catty, but all of the cats are attracted to it, wondering...

Circus Puppy, the greatest show around, is coming to you! Help these dogs stack, balance, and leap their way into your hearts in this quick-playing dexterity game. It’s the most popular circus...

You have finally set out to find the truth. You’ve heard the rumors of ancient runes and the lost pages of a scattered tome that tell of ancient and evil monstrosities; calling for their return...

Space Battle Lunchtime Card Game is based on its namesake graphic novel by Natalie Riess, about Earth baker Peony who gets the deal of a lifetime when she agrees to be a contestant on the Universe's...

Play as the three little wolves in this revamp of a classic tale! Work to build the tallest house before the Big Bad Pig demolishes your building in this fast-playing card game. Features: Compete as...

A group of cats has been training very hard to master their profession — shooting off the biggest and best fireworks in the world! Although they are still rookies, they hope to become experts...

Aggretsuko is a fast-playing card game for 3-6 players, where each player takes the role of a mild-mannered office worker trying to get through their work each day. If a worker becomes frustrated,...

Lanterns Dice: Lights in the Sky

The harvest is in, and now it’s time to celebrate! The emperor has declared that this shall be the best harvest festival yet. Players act as artisans, decorating the palace lake with floating...